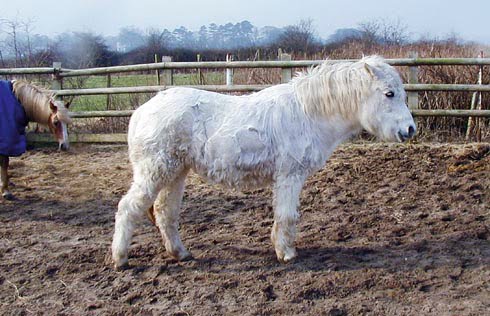 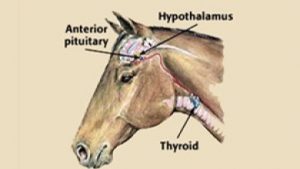 Cushings disease in horses (pituitary pars intermedia dysfunction) is a common disease associated with the ageing horse, but it’s been reported in horses as young as 7. In a healthy horse, hormones exist in balance and play an important role in maintaining and controlling bodily functions. The hypothalamus and pituitary gland which sit at the base of the brain, are the command centre to produce hormones such as ACTH and Cortisol. In Cushing’s disease, the nerves in the hypothalamus progressively degenerate and produce insufficient quantities of a nerve transmitter called dopamine. Dopamine controls the secretion of ACTH and cortisol by the pars intermedia which is in the pituitary gland.  Cushing’s disease in a horse or pony has an imbalance of these hormones. which results in the symptoms of PPID.

If your horse or pony has one or more of these symptoms, contact your vet for a diagnosis. They’ll conduct one or more tests to detect ACTH and/or cortisol levels in the blood. PPID can be controlled with medication.  Most vets prescribe Pergolide, which stimulates dopamine receptors in the brain and replaces the activity of the damaged nerve supply to the pituitary gland. This results in a reduction of hormone production to normal levels. The dose range is wide and the improvement in clinical signs and ACTH levels is often used to determine the best dose rate for each horse. As the disease is degenerative, it’ll become progressively become worse over time, but many horses or ponies on medication can lead very normal lives.

Avoid feeds that are high in sugar and starch. If your Cushing’s horse is overweight, avoid restricting his diet entirely.  Remove concentrates, but never restrict hay as hunger will stress him and cause other potential issues such as colic or ulcers.

As every horse or pony is an individual, if you have any queries about feeding your PPID equine you can contact us: Anita 0408 920707, email anita@fibregenix.com.au